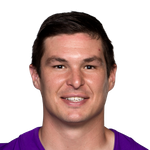 It appears Jimmy Garoppolo will miss a few weeks with his high ankle sprain, which means we go back to Mullens as the starter. There was a stretch of games he started for Kyle Shanahan's offense back in 2018. He played competently, averaging 284.6 yards per game while throwing 13 touchdowns and 10 interceptions over eight games. He averaged 34.2 pass attempts per game, so Shanahan wasn't afraid to let him loose, though the defense wasn't great back then. From Week 9 through Week 17 (when he started), he was the No. 17 quarterback in fantasy. The Giants defense has been what I'd call above what we expected, as their front seven is generating pressure, as evidenced by their 9.1 percent sack-rate, which is the sixth-highest mark in the league. They've allowed a pedestrian 7.0 yards per attempt to the combination of Ben Roethlisberger and Mitch Trubisky, so this matchup doesn't appear to have must-start written all over it, which is what you need to start someone like Mullens. There are much better streaming options out there.