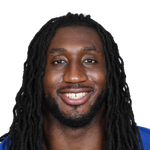 Once you let the genie out of the bottle, you can't put him back in, right? Well, the Colts did their best to make sure Alie-Cox fell back behind Doyle last week while playing him on just eight pass plays while Doyle was in on 16 of them. That didn't stop Rivers from targeting Alie-Cox on three of those routes, which amounted to 3/50/1 while Doyle didn't see a single target. It's tough to trust anyone in this tight end unit, but with all the injuries at wide receiver, someone is going to be relevant. The Bears have allowed a 75 percent completion-rate to tight ends through three games, including 1.99 PPR points per target, which is the 12th-most in the NFL. Both T.J. Hockenson and Evan Engram totaled 56-plus yards, but then we saw Hayden Hurst total just one catch for one yard in Week 3, though it was a touchdown. If you're trusting one of them, it should be Alie-Cox based on what we've seen the last two weeks. He's a risky TE2 but one who comes with some major upside. Doyle is not someone you can play coming off a game with zero targets, as he might not be completely healthy at this point.