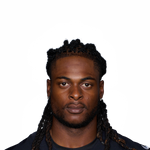 He's the WR1. He's only played three and a half games, yet ranks as the No. 14 wide receiver in PPR formats. He posted the best wide receiver performance of the year in Week 7 when he tallied 13 receptions for 196 yards and two touchdowns but was dethroned later that night when Tyler Lockett went bananas. Can Adams one-up his performance from last week? I kid, kind of. Going into their bye week, the Vikings starting cornerback Adams will see most, Jeff Gladney, had allowed more yardage in his coverage (388) than all but one cornerback. On just 32 targets in his coverage, he's allowed 388 yards and three touchdowns. In fact, the Vikings don't have a single cornerback who's played at least 50 snaps in coverage who's allowed lower than a 101.9 QB Rating. There have been four wide receivers who've already hit 22-plus PPR points against the Vikings, including Adams in Week 1 when he went for 14/156/2. Start him anywhere and everywhere you can. Duh.