Welcome back to another edition of the weekly fantasy baseball risers and fallers. You know the drill: I cover some of Major League Baseball’s hottest and coldest players from this past week and analyze their metrics to forecast them going forward. Below, you’ll read about five players on the rise (three hitters, two pitchers) and three hitters I expect to decline in the second half. Let’s start with some of the hottest young hitters in the game today.

Oscar Mercado (OF – CLE)
Mercado filled the stat sheet last week, hitting .407 with three home runs, three steals, and nine RBIs. His .507 wOBA ranks 14th among all hitters over that stretch, which is impressive considering Mercado is not known for his power. The former St. Louis farmhand has surprised the league in many ways. Cleveland brought him up more for his defensive skills and speed to spark a struggling lineup in the first half. All he’s done is take hold of the two-hole in the lineup and provide owners with fantasy goodness.

He’s not a Statcast stud but makes a lot of contact, and his sprint speed is in MLB’s top four percent. Given his ground-ball rate and speed, his current .331 BABIP shouldn’t drop. I liken Mercado to Victor Robles with a lower strikeout rate. The properties of the ball this year should allow Mercado to maintain some of his power that he’s shown this year, and he could reach 20 stolen bases before the year is out.

Keston Hiura (2B – MIL)
Hiura hit a cool .517 with one home run, two steals, and a .607 wOBA last week. He did not sneak up on fantasy owners like Mercado, but what he’s done early in his career is still extremely impressive. He’s currently hitting .331 with nine home runs and six steals in just 155 major league plate appearances.

A 30.3% strikeout rate means that his average will plunge below .300, but a 13% barrel rate and average exit velocity of 93.1 mph show that the power is no fluke. He ranks inside the top 20 in all of baseball among hitters with at least 90 balls in play with a 97.1 mph exit velocity of fly balls and line drives. I’ve been impressed with his ability to hit all types of pitches. His xwOBA against fastballs, breaking balls, and offspeed pitches is each above .370. Strikeouts are his only weakness right now, but he appears to be the real deal.

Ramon Laureano (OF – OAK)
Since the All-Star break, Laureano has been an absolute monster, hitting .471 with four home runs, two steals, and 13 runs! About five weeks ago, I touched on Laureano as a riser when he was owned in under 50% of leagues. He’s only up to 65% per FantasyPros’ ESPN/Yahoo consensus ownership rate, which is insanely low. I try not to repeat players in this series, but Laureano can help fantasy owners win a championship this year. Below are two charts. The top one is his minor league spray chart from 2017, and the bottom is his spray chart this year. 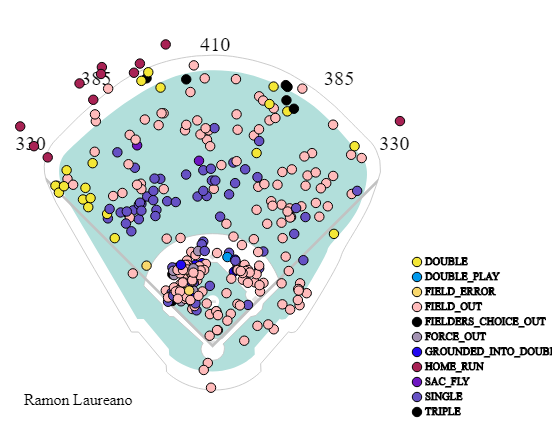 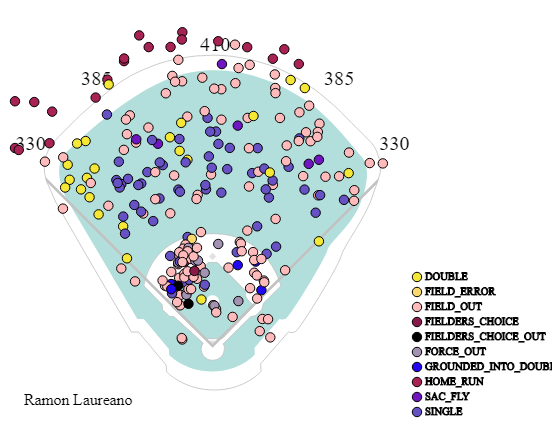 In my previous article hyping Laureano, I called him a potential 25-homer, 20-steal player. Well, he’s already hit 20 bombs and has a legitimate shot at 30 this year. You can see that, in 2017, he did not show elite power. His power had not fully developed and all of his home runs were hit to left field. So far this year, he’s not only mashing balls to left field, but also to center and right-center. His power has grown, which is typically the last tool to show up for a hitter. Strikeouts will continue to be an issue, but 30-20 players do not grow on trees. We saw seven of them last year, and Laurano could pull it off this year.

Yu Darvish (SP – CHC)
What a crazy season for the Cubs’ starter. Darvish has yet to give up a run in two second-half starts and has only walked one batter in the last 12 innings. He has found his command and utilized his cutter more frequently. 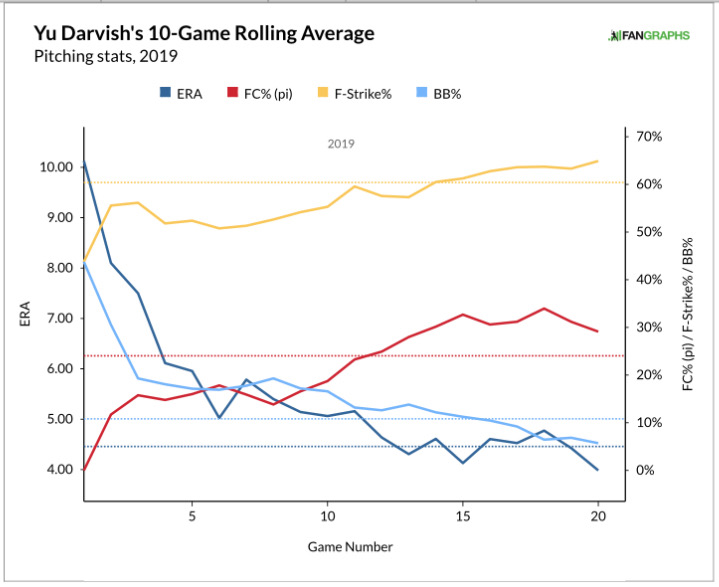 In the graphs above, it’s apparent Darvish struggled with walks early in the season. He was constantly falling behind hitters with a low first-pitch strike rate (F-Strike%). After start number 10, we see a steady increase in the usage of his cutter (FC%) and a massive jump in F-Strike%. As a result, his ERA and walk rates have dropped significantly.

Darvish is deploying his cutter to mask his four-seam fastball that has given up a 1.179 OPS this year. Basically, his fastball turns everyone into Mike Trout. Because he can throw the cutter for strikes (50% zone rate), he’s able to fool hitters into thinking they are getting a fastball they can crush. Instead, the hitter has to deal with the sharp break of the cutter, which has given up just a .523 OPS. Now that Darvish has found a pitch he can throw for strikes and get whiffs on, he’s in a great position to succeed in the second half.

Jakob Junis (SP – KC)
Junis is certainly an under-the-radar pitcher who pitches for a struggling Royals team, and his ERA is currently 4.83. He’s more a deep-league option, but let’s look at why he’s intriguing. Since the All-Star break, Junis has two wins, a 0.86 ERA, 0.92 WHIP, and 17 strikeouts across 13 innings. It’s been all about his slider in those outings. He’s throwing it 53.7% of the time since the break. His slider has been great with a 36.7% strikeout rate and just a .276 SLG against. He’s also able to throw it for strikes with a 41.7% zone rate, which means he can utilize the pitch in any count.

Unfortunately, it’s really his only plus pitch. However, I’d grab him in deep leagues where you need strikeouts. He draws the Indians at home this week and could still face the Tigers twice, Orioles twice, and the Marlins once going forward. In shallower leagues, you can stream him at home or on the road against below-average opponents.

Rhys Hoskins (1B/OF – PHI)
Hoskins is hitting just .212 with one home run (that he hit Sunday) and just three RBIs since the All-Star break. I flipped him in my home league about four weeks ago because his metrics pointed to overperformance. His xwOBA is .343 since the start of July, but it dropped to .222 last week. In fact, his expected batting average, per Baseball Savant, is currently .224. Hoskins is great at maximizing his value on pulled fly balls, which is where he generates his power. Given his home park, it’s not a bad plan. While yesterday’s game was at PNC Park in Pittsburgh, Hoskins hit a home run down the line in left field. Here are the Statcast metrics on that batted ball.

Basically, similar batted balls fall for a hit 10% of the time, and Hoskins was rewarded with a home run. He will be valuable going forward, but he won’t maintain a .301 BABIP given elevated fly-ball and pop-up rates that are about 13 percent and six percent above league, respectively. I’d expect Hoskins to hit around .235-.240 with solid power going forward. Given the properties of the ball this year, those numbers will be a dime a dozen in the final two-plus months of the season.

Elvis Andrus (SS – TEX)
The Texas shortstop was putting many preseason doubters in their place with an impressive first half that netted eight home runs, 19 steals, and a .303 batting average. However, over the last week, he was miserable with just one hit and six strikeouts over 19 plate appearances. Andrus is not a power hitter by any means, but his barrel rate has dipped this year. So while we shouldn’t expect much power, his value is on the base paths. As it turns out, his sprint speed is also down to 26.7 feet per second (ft/sec), which is actually slightly below-average.

He’s never been a burner, so managing 20+ steals off of his ability to read the pitcher has not been a problem. Where I see his stolen base production slipping is due to his inability to get on base at a high clip. In the first half, he managed a .339 OBP. Given his 4.9% walk rate and slipping quality of contact, I’ll take the under by quite a bit in the second half, limiting his opportunities to get swipes. Andrus will provide a little speed to go with a decent batting average, but I wouldn’t expect much of anything else going forward.

Miguel Cabrera (1B – DET)
It’s not that many fantasy owners are relying on Cabrera to carry their fantasy teams, but he’s still owned in far too many leagues (43%). He’s been an absolute fantasy monster and perennial first-rounder over the last decade and a half. However, injuries and age have quickly caught up. Since the start of 2017, Cabrera has played in just 256 games. Over that time frame, his triple slash line (AVG/OBP/SLG) is .268/.345/.397 with just 24 home runs. That’s OK for one full season, but not over the course of two and a half years.

Miggy’s average exit velocity of 90.2 mph is still very respectable. In fact, it’s 48th among qualified hitters this year. His average exit velocity on line drives and fly balls, however, is just 91.8 mph, which is in baseball’s bottom 27 percent. That means he’s hitting the ball hard on the ground and not in the air, hence a suboptimal 6.1% barrel rate. Hard-hit ground balls are not all that valuable. If I tighten up the launch angle range to between 20 degrees and 35 degrees (AKA launch angles that produce home runs), Cabrera’s exit velocity on those balls drops to 89.1 mph, which resides in the bottom 15%. Cabrera’s decline has been rapid, and there are no positive signs on the horizon.