The powers that be at FantasyPros have done a glorious thing: let a ZeroRB truther write about ZeroRB. In this economy. No, no, keep reading! Don’t click that red “X” in the corner of the browser tab!

A few things to note before we dive into players that make up the strategy.

The reason to zig into the ZeroRB strategy is straightforward. You’re looking to create a resilient lineup that gets better over time rather than getting crippled by injuries. This is why taking so many stabs at high-end running back is usually a fruitless endeavor. As much as it makes somebody feel good to take a Josh Jacobs-type running back in the fourth round, it’s a losing proposition with negative expected value compared to taking an upside wide receiver in that same range.

Running backs are being drafted earlier, but the most important thing to glean from the above table is that you don’t need to settle for less. It’s one thing to have your pick of the RB1-RB6, but it’s highly concerning when you still have to select a questionable RB7-RB12 at the end of the first round into the second. At that point, it’s worth taking the wide receiver or tight end.

Running backs get hurt much more often (and more severely) than wide receivers. It’s just the nature of the position. A running back drafted in the first five rounds is 200-360 percent more likely to suffer a severe injury than a wide receiver. The risk with drafting high-leverage running backs, therefore, is astronomical.

Rosters buoyed by running backs selected with high draft capital are more likely to miss out on high-ceiling players at the beginning of the season. When looking to score the most points in crunch time of the fantasy season, you’re coming up short on the upside needed to win your league even if you have great luck with the early-round backs you picked. 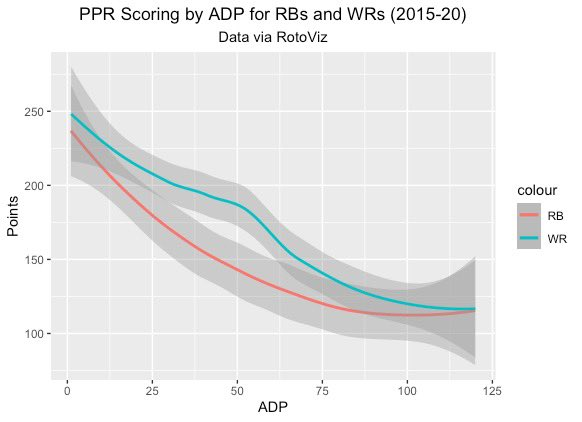 By average draft position (ADP), running backs do not score as many fantasy points as wide receivers do at their ADP. The more flex positions in your league, the more advantageous that ZeroRB strategy becomes to capture league-winning upside. We also must consider FAAB budgets as an essential part of churning the bottom of your roster to find running back values that may pop up during the season.

Here’s a draft I conducted with a #ZeroRB build, along with my thought process with roster construction and structural drafting in mind.

1.07: Travis Kelce (TE – KC)
The advantage Kelce provides is substantial. He provides week-winning upside at a position that doesn’t have many stars. By taking him in the first round, I’ve already gained a positional advantage against most of my league-mates. Kelce turns 32 years old this season, and he’s not slowing down anytime soon. His targets in a highly condensed offense aren’t drying up either. He’s not merely good for a tight end either; Kelce would have finished as the WR4 last season.

2.06: Justin Jefferson (WR – MIN)
Jefferson cashed in one of the best rookie wide-receiver seasons in recent memory despite a condensed target share in Minnesota. The best part? He’s not overpriced in terms of ADP, as I snagged him at 2.06. While his extreme efficiency (70% catch rate, 1,400 receiving yards on just 125 targets) may come down, his volume could rise even more. He may be the next wide receiver star in this league, and one you’d have to draft in the first round in the years to come. To me, Jefferson in the mid-second round is a discount. Take a bet on somebody who could profile as the next Julio Jones.

3.07: Allen Robinson (WR – CHI)
Robinson is a clear volume bet who just upgraded his situation exponentially. Considering he averaged 100 receptions and 152 targets the last two seasons with Chicago’s lackluster quarterback play, he now gets (hopefully sooner rather than later) Justin Fields as a quarterback upgrade. Even if Andy Dalton is the starter to begin the season, Robinson is a locked-in top-12 wide receiver in all fantasy formats. Now, with this upgrade, he has paths to becoming the overall WR1 in fantasy. Getting him at 3.07 is a steal. With the first three picks in the draft, I’ve attained consistency and massive upside.

4.06: Julio Jones (WR – TEN)
Sensing a theme yet? It wasn’t what I set out to do, but I took another receiver with a condensed target tree in Jones. Coming over to Tennessee from Atlanta, he now shares the spotlight with A.J. Brown. Why can’t both receivers be top-12 options? Tannehill is efficient, which we can’t call an outlier anymore. Tennessee may also be inclined to pass more now that it has two elite options. I’m definitely keen on taking Jones inside the “running back dead zone.”

5.07: Kyler Murray (QB – ARI)
Murray was on NFL MVP watch lists before his shoulder issues in the middle of last season. When he was on, he was on, with QB1 performances almost 70% of the time in 2020. Adding DeAndre Hopkins helped him solidify that upside. Heading into Murray’s third season, the Cardinals continues to add to his weaponry. With true 4,000-yard passing and 1,000-yard rushing upside, there’s no reason why a healthy Murray can’t be the overall QB1 in fantasy. Players like Murray make it a bold stretch to justify selecting Patrick Mahomes in the third round. With this five-pick start, I quickly have a clear advantage at three positions.

6.06: Jerry Jeudy (WR – DEN)
There was good and bad with Jeudy last season. The good? He saw a ton of targets with Courtland Sutton out for the year past Week 2. The bad? He was pretty inefficient with them, recording a 46% catch rate and a dozen drops. For Jeudy’s sake, the best thing that can happen is Teddy Bridgewater starting at quarterback for the Broncos, as Jeudy’s route-running should mesh well with a timing-and-rhythm passer. Jeudy had to run much deeper, slow-developing routes with Drew Lock, and that’s clearly not his strong suit. Get Jeudy in the optimal situation, and the sky is the limit for last year’s first-rounder. He’s currently in one of my flex spots, and winning the race to fill the flex with stud players is one of the biggest keys towards unlocking your lineup’s potential.

7.07: Javonte Williams (RB – DEN)
Williams can make an immediate impact as a rookie even though Melvin Gordon is still in Denver. Gordon could be a cut candidate, and the Broncos improving their passing game behind all of their weapons would only help Williams. Finding a rookie running back in an ambiguous timeshare is a great way to capitalize on the depressed ADP and make the price point even more palatable. In this range are running backs like Gordon, Raheem Mostert, Chase Edmonds, and other timeshare running backs, but none have as much potential as Williams in 2021.

8.06:DeVante Parker WR – MIA)
Everybody wants the shiny new toys in Miami, but I’ve hitched my wagon to the old, reliable Honda Civic of its offense. Parker always seems to find his way further and further down draft boards. Yet make no mistake: He probably has the most realistic path toward leading the Dolphins in most receiving categories, including targets, this season. Getting him in the eighth round feels like stealing.

9.07: Michael Carter (RB – NYJ)
Another rookie, Carter is my RB2. The outside-zone scheme Mike LaFleur will use (see Shanahan, Kyle) in New York is perfect for Carter’s skill-set. I don’t envision Tevin Coleman taking many opportunities in this Jets offense as people think because he isn’t that good anymore. Coleman’s leg up on the competition is that he knows the offense and can be a player-coach to help speed up the learning process in the running back room. I see the talent winning earlier than usual here, so Carter should have some early utility from the jump.

10.06: Mike Williams )WR – LAC)
“Big Mike” can also refer to the salary he’s making in 2021, which is just north of $15 million. Yes, that’s U.S. dollars. Williams has the young, elite quarterback in Justin Herbert, the opportunity, the types of targets you want in fantasy, and nobody else behind him to take that opportunity away. Williams can be a WR1 this year. When looking at a late-round wide receiver, Williams is a perfect fit for this roster construction.

11.07: James Conner (RB – ARI)
12.06: AJ Dillon (RB – GB)
13.07: Kenneth Gainwell (RB – PHI)
I grabbed a few other running backs with enough stand-alone and contingent value to matter in this roster build. Conner could easily turn back the clock to his healthy Pittsburgh days and usurp Chase Edmonds as the starting running back. When looking at ranges of outcomes for running backs, we want guys who can be consistent fantasy factors in ambiguous backfields.

Dillon is arguably the most sought-after contingent value running back of the #ZeroRB tier. If something happens to Aaron Jones, Dillon immediately becomes an RB2 with massive upside. Dillon will have a significant role in this offense anyway with Jamaal Williams off to Detroit, but it will likely be touchdown-dependent with little receiving upside.

If seeking receiving upside, look no further than Gainwell. The fifth-round NFL Draft pick could be the NFC’s version of Nyheim Hines for new head coach Nick Sirianni, who coached Hines in Indianapolis. Boston Scott could be a cut candidate for the Eagles, who have a glut of running backs on their roster, but Gainwell could carve out a specialized role that doesn’t involve much rushing. Gainwell is an accomplished receiving back and route-runner, so it’d be foolish not to use those gifts in Philadelphia. Given their troubles at wide receiver, the Eagles will want to get whenever they can out of their receiving group, regardless of position.

You should never go into drafts setting out to implement a ZeroRB strategy. It’s a way to capitalize on rising running back ADP, increased injury rates versus other positions, and the overall value of elite players at other positions. It’s a tool in your toolbox to use when needed.

I left this draft with a large positional advantage at quarterback, wide receiver, at tight end. With all my young backfield talent, I could also end up well-represented at running back. This type of roster construction can pay off in the right hands.