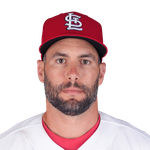 Goldschmidt had an interesting 2020 season, during which he brought his batting average back up to .304 and his walk rate to 16%, while simultaneously dropping his strikeout rate to a career best 18.6%. After swinging more than he ever had in his first season with the Cardinals, Goldschmidt returned to the patient approach he had developed throughout his career, swinging at just 40.5% of pitches (after a 46.4% swinging strike rate the year before). But while his average went up, his power waned, as he hit just six home runs and had a career-worst .466 slugging percentage. Nolan Arenado batting behind him this year should help, and he had bone chips removed from his elbow this offseason. There could be another big-time power season left in Goldschmidt's bat, but the more likely scenario is that he will put up solid but unspectacular production at the first base position.