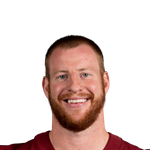 Despite missing every starting wide receiver not named Nelson Agholor, Wentz was able to throw for over 4,000 yards and 27 touchdowns in 2019, highlighting just how stable his floor is when healthy. The Eagles rewarded him by drafting three wide receivers, as well as trading for Marquise Goodwin. It's worth noting that the Eagles did strengthen their defense, which could lead to fewer pass attempts, but his efficiency should rise. His weekly ceiling may not be as high as someone like Josh Allen, but his weekly floor is much higher.