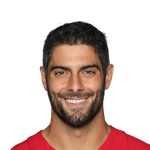 There are a lot of people (myself included) who don't realize just how impressive Garoppolo's numbers have been to this point in his career. He's averaged at least 8.0 yards per attempt in every year he's started a game, including 8.4 yards per attempt in 2019. He's completed 67.5 percent of his passes, and he has a 2.10:1 touchdown to interception ratio. Despite all that, he's been a top-12 type quarterback in fantasy just 28.0 percent of the time since joining the 49ers. How is that? He plays for Kyle Shanahan and has averaged just 29.7 pass attempts per game. When you do that to a strictly pocket passer, it crushes his fantasy upside. It's unlikely that changes in 2020, especially when you consider he'll be without his No. 1 receiver for a while, as Deebo Samuel recovers from broken foot surgery. It's worth noting that two of his four QB1 performances in 2019 were against the Cardinals, the team he'll play in Week 1. Again, he'll be without Samuel, but George Kittle might go nuclear. Garoppolo is a solid quarterback in 2QB formats, even if he doesn't come with a top-12 type ceiling.