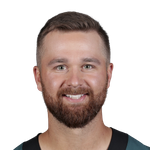 Elliott actually had his most accurate year of his career (84.6% field goal percentage, 35-of-37 extra points made), but he simply saw fewer chances. After seeing 31 field goal attempts in each of his first two seasons, he saw just 26 last year, and only 11 from at least 40 yards. The Eagles offense should be somewhat better this year if the team can avoid similar devastating injuries to its receivers (though that's hardly a certainty), which should mean more chances for Elliott. He's a strong starter in 12-team leagues.