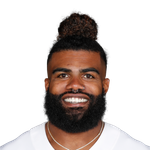 It was one of Elliott's worst games in the NFL last week when he rushed for just 34 yards against the Seahawks. That's the third-lowest total of his career, though you shouldn't get used to it. The Browns are a team that you can run the ball against. Some will say they've still yet to allow a running back more than 15.0 PPR points, but I'll remind you they've played against Mark Ingram, Joe Mixon, and Antonio Gibson, who have all struggled to start the year. It's still pretty shocking to see that the Browns haven't allowed a team of running backs more than 70 yards on the season considering their linebacker and safety issues. There are multiple avenues for Elliott, though, as they've allowed 15 receptions for 110 yards through the air to running backs over the last two weeks. The Browns have only faced 56 carries despite their opponents running 69.3 plays per game to this point. So, it's no shock to see their opponents have called a pass play on 63.5 percent of plays, which ranks as the sixth-most in the league. The Cowboys need to bring more balance to their offense, and it should start in this game. Elliott should be started as a high-end RB1 against a team that allowed seven different top-six running backs last year. I'd certainly consider him in cash games.