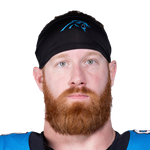 The trend continued with Hurst with Julio Jones in the lineup. He's struggled in the games where Jones didn't play, but here are his totals with Jones in the lineup: 6/68/0, 4/57/1, 4/51/0, 5/72/1, and 3/38/0. He's averaging a mediocre 5.6 targets per game on the season, which is good enough, though not quite the 120-target pace that Austin Hooper was on last year. Hurst's current 16-game pace is 89.1 targets. The unfortunate part is that he already played the Panthers in Week 5 and produced just two catches for eight yards, though it's worth noting that Jones was not in the lineup for that game. The Panthers have allowed six different tight ends finish as top-18 options against them, so they're far from a must-avoid matchup, though they haven't allowed much upside, as no tight end has scored more than the 12.2 PPR points that Jared Cook did last week. The 4.77 yards per target they've allowed ranks as the second-lowest number in the league, so it hasn't been a very good matchup to target. Consider Hurst just a mid-to-high-end TE2 this week who benefits from the receivers' coverage.