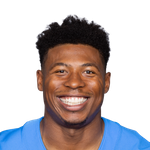 Over the last two weeks, we've seen Ballage make his mark on this backfield, racking up 137 yards and a touchdown on the ground, while chipping in seven catches for 49 yards through the air. Did I think it was possible that Ballage would be a top-12 running back over a two-week stretch in 2020? Nope, but he ranks as the No. 12 over the last two weeks. Don't expect Kelley to make a resurgence any time soon either, as he's averaging 0.66 fewer yards per carry than he's been expected to according to NFL's NextGenStats, which is the second-worst number in the league. Ballage gets his "revenge game" against the Jets this week, a run defense that's underrated by many. They've allowed just one 100-yard running back this season, and it was Melvin Gordon when he saw 23 carries on Thursday night football. In the same scheme last year, they allowed just one 100-yard rusher. To be fair, they've lost quite a few players, but it's not an easy matchup. According to Football Outsiders' DVOA metric that factors in level of competition, the Jets are the 10th-best run defense in football. It's no coincidence that they've allowed the 12th-fewest PPR points per weighted opportunity to running backs. Running backs have averaged a rock-solid 29.2 touches per game against them, so we should be expecting another 15-plus touch game out of Ballage. Even if efficiency isn't great, he's in the low-end RB2 conversation this week. Kelley saw a season-low seven touches last week, moving him well into the RB4 territory as someone who's finished with more than 3.1 yards per carry just twice through nine games.