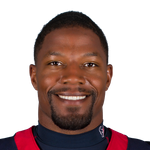 We're expecting David back to the lineup this week after missing three games due to his concussion he suffered back in Week 9. It seemed like Duke injured himself early in the Thanksgiving game, which led to C.J. Prosise stealing some work, though Duke did wind up playing 42-of-56 snaps and posting 80 total yards with a touchdown. It's clear they didn't want him taking over David's role, which has netted 16.7 touches per game this year. He's not returning to a matchup that should get you excited, though. The Colts have allowed ball carriers just 1.13 yards before contact this year, which is the third-lowest mark in the league. This is bad news for Johnson. There have been 64 running backs who've rushed 50-plus times this year, and Johnson's 2.13 yards after contact ranks 62nd on that last, behind only Peyton Barber and Devonta Freeman. Sure, Derrick Henry ran all over them last week, but they were without their best defensive lineman (DeForest Buckner) and one of their starting linebackers (Bobby Okereke) for that game. Henry is also the only running back to run for 100-plus yards against the Colts under Matt Eberflus (span of 43 games). In fact, Henry is the only one who's topped 72 yards on the ground against them this year. In non-Henry games, the Colts have allowed just 641 rushing yards on 196 carries with five rushing touchdowns. That's just 3.27 yards per carry and 71.2 rushing yards per game, and that's to entire teams of running backs. Even factoring in schedule adjusted fantasy points, the Colts rank as the fifth-toughest matchup for running backs. David should return to 15 touches but they're not likely to net a whole bunch of yardage, putting him in that high-end RB3 territory without much of a ceiling. If he can't go, Duke would take his spot in the rankings.