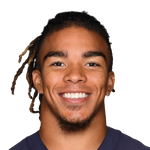 Claypool may have finished as the WR19 on the season, but his year was littered with lackluster performances. He posted WR3 or better type numbers in just 50 percent of the games last year, which was tied with Jamison Crowder and DeVante Parker for 34th among wide receivers. His four-touchdown game in Week 5 really catapulted his numbers at season's end, as he failed to top 59 yards in 11-of-16 games, making him a touchdown-or-bust option most weeks. With Ben Roethlisberger's arm strength seemingly deteriorating by the day, it's tough to see Claypool having a true breakout season in 2021, as he relies on those high value targets more than JuJu Smith-Schuster and Diontae Johnson do. Claypool is an upside pick for sure, but not one I'd bet heavily on.