D.K. Metcalf’s workload should only continue to increase as he enters his sophomore year after solidifying a role in the offense.

Whether you are brand new to fantasy football or a seasoned veteran, mock drafting is an invaluable exercise to prepare for the upcoming season. I have been using our Draft Simulator for years and have found so many ways it has been incredibly helpful, from identifying sleepers to avoiding the dreaded draft tilt.

One thing I will point out about mock drafting during the weeks (and even months) before the actual season – the NFL is constantly changing. Not only is this true in a normal year, but this year is exceptional to the extreme. I bring this up because your draft grade depends on the current consensus rankings at the time you are mock drafting.

I cannot stress this enough. Remember to frequently mock draft with the Draft Simulator using your league’s settings all the way up until your league’s actual draft. It’s excellent practice and you can recognize changes in player rankings much easier. Check out July’s Mock Draft: 21-Team PPR Late Pick article to see the difference a few weeks can make.

Given the current environment, my goals for 2020 are quite different than they would have been last year. Normally, I would use my last rounds to load up on flyers who may have a shot at making a splash. Instead, I am focusing on loading up on alternates and backups.

I want to see a team that is well balanced that has options for breakouts and is also conservative with backups and enough WR3 options to swap out in case of missed games and on a matchup basis.

Round 1.11 – Julio Jones (WR – ATL)
I have found in many mock and real drafts this year, I have been selecting from either the 11th or 12th position in 12-team leagues and my first choice is repeatedly Julio Jones. The elite RBs are usually off the board by this time, so it’s more worth my time to go with stud WRs. Other options such as Tyreek Hill or Davante Adams are also great choices here, but I have more optimism with the Falcons offense.

Round 2.02 – Tyreek Hill (WR – KC)
One benefit of picking late is the ability to go back-to-back in your picks. While this isn’t the greatest after your two picks and you have to wait 20-plus turns until you’re up again, you can identify those players who are studs in their own tiers. I debated taking Hill in the 1st but knew I was only two picks away from snagging him.

I did have my eye on Kenyan Drake in Arizona, but there are a few running backs I have in mind in the 3rd through 5th Rounds that I am waiting on.

Round 3.11 – Le’Veon Bell (RB – NYJ)
The next two picks in my mock draft may be a touch controversial to some. However, I believe in Bell’s opportunity in a revamped Jets’ offense for 2020. I recently published Are We Sleeping on Johnson, Gurley, and Bell where I explore the running backs’ new environments and their potential for 2020. I plan on targetting these three running backs in every draft wherever possible. If I can load up on elite WRs with the option of having at least one of these RBs available later, I will take it.

Round 4.02 – David Johnson (RB – HOU)
Even though I missed out on Gurley (my favorite of the three former elite RBs), I was tickled that David Johnson was still available to grab at the beginning of the 4th Round. Creating the rest of my team out of two WR1s and two potential RB1s is a dream. At worst, I have two high-end RB2s, and at best, I have two RB1s on my roster.

Round 5.11 – Darren Waller (TE – LVR)
Part of the pitfall of drafting WR, WR, RB, RB, is missing out on elite talent at TE. As we know, there are the top-3 maybe top-4 TEs in the NFL, then there’s everyone else. Waller was a breakout star for the Raiders in 2019 and I see his production continuing into 2020. I will be honest with you, I would also be completely fine waiting on the position until later. Tight ends like Hayden Hurst, Chris Herndon, and Blake Jarwin are sleeper TEs who have a tremendous upside in 2020. They are either going in the 14th Round or going undrafted.

Round 6.02 – D.K. Metcalf (WR – SEA)
Whether it’s Metcalf or Tyler Lockett, I want a piece of that WR corps in Seattle. A great stack would be to pair one these players with Russell Wilson, who I will be targeting in this draft. He was a breakout rookie last year seeing 100 targets with 58 receptions, 900 yards, and seven touchdowns. What is most impressive about Metcalf, much like his counterpart in Lockett, is his ability to come away with the football in contested catches. His workload should only continue to increase as he enters his sophomore year after solidifying a role for himself in the offense.

Round 7.11 – Christian Kirk (WR – AZ)
Arizona is another team that will be seeing a different reflection in the mirror in 2020. Houston’s rather interesting trade (to put it mildly) with the Cardinals landed elite WR DeAndre Hopkins as the new target for sophomore QB Kyler Murray. As we know with talent like Hopkins, defenses will be dedicated to double coverage where he is concerned, allowing other pass-catchers like Kirk to potentially see more looks.

Round 8.02 – Deshaun Watson (QB – HOU)
There are only a few things I would change about this draft, and one of them is missing out on Wilson to stack with Metcalf. However, Deshaun Watson has fallen down draft boards and I was rather surprised to find he was available in the 8th Round. Stacking Watson with David Johnson, arguably one of the best pass-catching running back in the league, was a no-brainer here.

I will note that I am an advocate of the late-round quarterback strategy, however, I usually try not to cut off my nose to spite my face. My team is shaping up well at each position and I did not want to pass up on the opportunity to snag Watson simply to stick to the late-round QB strategy “just because”. I also have no problem with drafting more than one quarterback in single QB leagues. Whether you are waiting on the position until later or you want to take a second QB, players such as Daniel Jones, Matthew Stafford, and Ben Roethlisberger are all going late in drafts.

Round 9.11 – Phillip Lindsay (RB – DEN)
Even with the addition of Melvin Gordon to the Broncos’ backfield, I am still a fan of Lindsay in that offense. I am aware of the negative takes, however, many people had similar arguments prior to the 2019 season where he had 224 rush attempts for over 1,000 yards and seven touchdowns. He was also involved in the passing game catching 35 receptions on 48 targets for 196 yards. In PPR, I will take on the risk of Lindsay in the 9th Round. If he doesn’t pay off, I haven’t wasted high draft capital.

Round 11.02 – Justin Jefferson (WR – MIN)
This pick goes against my “don’t draft rookie WRs in redraft” mantra. With the exception of players like Metcalf and A.J. Brown, rookie WRs in redraft generally don’t pay off. While this is a guideline I tend to stick to, I still want to be flexible when I draft.

With Steffon Diggs off to Buffalo, there is an opportunity for Jefferson to fill a role with Adam Thielen. As with many of these later picks, there is little draft capital invested. I’ll take a shot on Jefferson to emerge in the offense and drop him if it doesn’t work. If you do decide to draft a rookie WR in this unprecedented offseason, be prepared to let go. Zoom meetings between players cannot replace reps on the practice field.

Round 12.11 – Tony Pollard (RB – DAL)
Round 12 starts the beginning of my safety/conservative picks. In the next three rounds, I focus on taking the backups of starters regardless of whose team they are on. Under normal circumstances, and we can all agree this year is the furthest from normal, I would be taking shots on flyers who may or may not hit. This year, I am looking more toward being prepared for COVID.

As I mentioned at the beginning of this article, my goal was to draft conservatively with backup options where I could get them. This went against the grading system, so as I result, I received a B- for my team. However, that does not bother me. I have Bell’s backup, as well as Ezekiel Elliot’s backup in Tony Pollard. I have Tyreek Hill so it made sense to grab mini-Hill in Mecole Hardman in the 14th Round. Also, since this is a PPR, I like having the pass-catching RB for the Colts with Nyheim Hines as well as the WR2 behind DeAndre Hopkins in Christian Kirk. 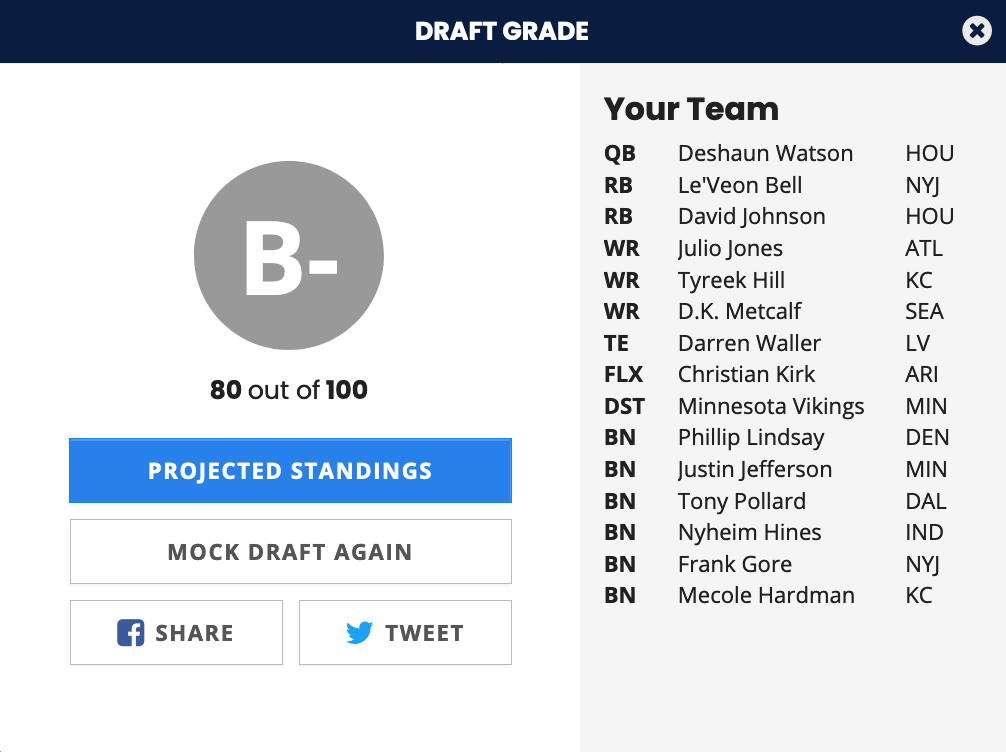 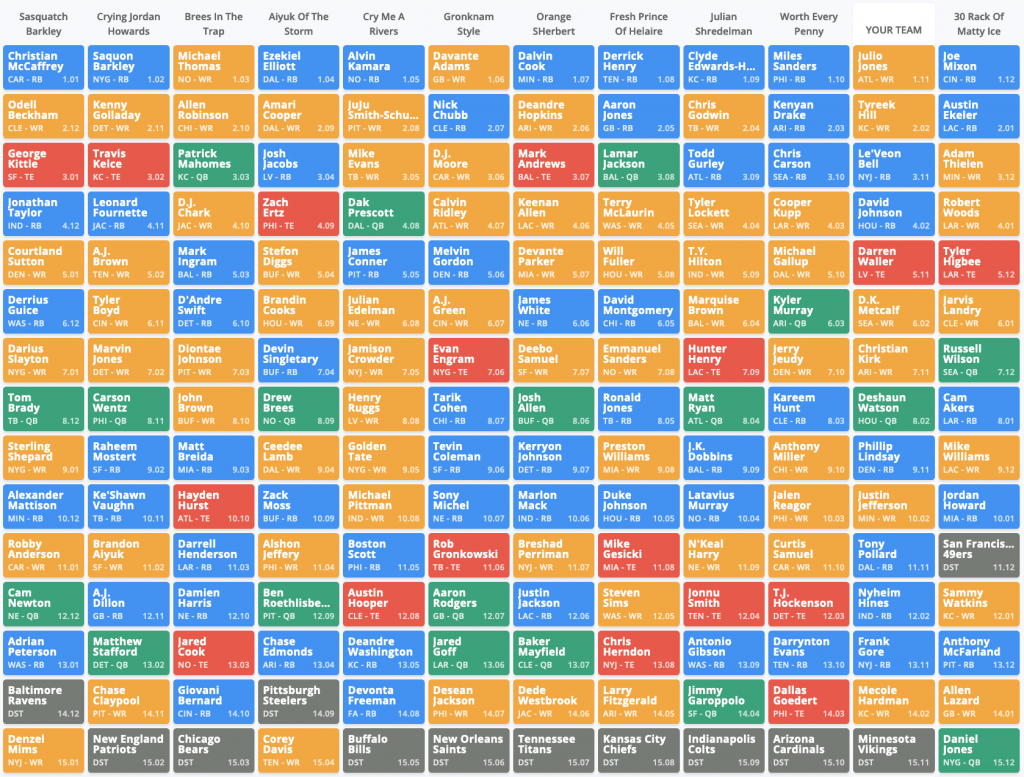 Remember, the purpose of mock drafting is not necessarily to get an A grade. It’s also meant to experiment with different strategies and identify players to target and when. Remember to visit the Draft Simulator frequently and keep practicing for the 2020 season.