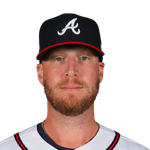 Smith had a rough 2020 season, losing several weeks to a bout with COVID-19 and being far less effective than usual when he did pitch. His dominant slider just wasn't the same, as batters hit .263 (after never hitting better than .193) and tallied a .398 wOBA (after never totaling higher than .282) against it. But Brian Snitker appears to be willing to throw out Smith's poor season almost entirely. Although he hasn't named Smith the closer, he has professed his confidence in him, and there's been speculation from beat writers that Smith will ultimately win the role after a battle with Chris Martin and A.J. Minter. Draft Smith as the presumptive closer unless you hear otherwise from Braves camp.