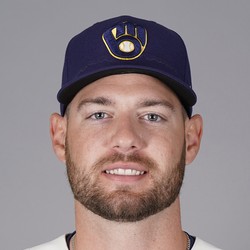 Houser has an elite fastball, which he relies on heavily and against which batters hit just .203 last season. Whether he can continue to succeed with just one very good pitch is an open question, but considering his FIP and xFIP fully supported his 3.72 ERA, it's entirely possible. Overall, Houser should provide strikeouts without hurting you elsewhere, so he's an ideal late-round add.

Houser exited Monday’s outing due to thumb tightness. The injury wasn’t deemed serious, and his exit was precautionary. Houser is all systems go for Sunday’s outing. The 27-year old is a key member of the Brewers rotation, he owned a (6-7) record with a 3.72 ERA, 1.24 WHIP and 117 strikeouts across 111 1/3 innings last season.