Jim Colombo rolls with Saquon Barkley at 1.2 in this too-early half PPR mock draft.

In case you missed it, I made my Fantasy Pros debut last week with this Way-Too-Early 2020 Fantasy Football Mock Draft article — and the response was overwhelming. The stats-packed, introspective piece blew the lid off the fantasy football community, drawing critical acclaim from exactly two people on Twitter and a smattering of bewildered friends and relatives on Facebook.

Have I made it? Am I well on my way to international fame and fortune?

I think the answers are obvious.

Despite being a top-dog fantasy sports celebrity now, I somehow managed to scrape up some free time to publish this, my second-ever fantasy football article at FantasyPros. This time around, the game is the same, but the situation is different. I’m still working with a 12-man, 14-round snake draft. I’m still rocking the FantasyPros Draft Wizard — but now receptions are worth just a half a point, and I’m drafting from the second slot instead of the eighth.

1.2 (2nd overall): Saquon Barkley (RB – NYG)
In Round 1, I wasn’t surprised to see Christian McCaffrey selected with the first overall pick. An inarguable stud and perhaps the most well-respected running back in the NFL (unless maybe you’re Booger McFarland), McCaffrey ought to be the first overall selection in just about any redraft league in 2020.

“But Jim,” you’re thinking, “this is a half-PPR league we’re talking about.”

Yeah, it doesn’t matter. Even in half-PPR leagues last year, the pass-catching McCaffrey finished on top of the regular season with 118.9 more points than the next-best running back. That was well ahead of Aaron Jones and Dalvin Cook, who rounded out the top-three fantasy finishers at the position — which brings us to my selection. Should I take Jones or Cook with the second overall pick?

Instead, I set my sights on two beasts of the NFC East: Saquon Barkley and Ezekiel Elliott. While I have long held Zeke in high regard, how could I possibly pass up Saquon? The dude is a machine. And with Jason Garret calling plays in MetLife (look at how he handled Zeke in Dallas), Daniel Jones entering his second year under center, and the Giants owning the fourth overall pick in the NFL Draft, there are plenty of reasons to feel optimistic about the Giants in 2020 — all of which could contribute to a monstrous season from Barkley.

2.11 (23rd overall): Lamar Jackson (QB – BAL)
In Round 2, the top-rated players remaining were Lamar Jackson, Austin Ekeler, and Todd Gurley. Now, I’m on the record to say I want to wait on a quarterback in 2020, but how could I let the reigning NFL MVP slip through my fingers? I couldn’t. I wouldn’t. I didn’t.

In half-PPR leagues last year, Lamar Jackson was the only player to outscore the unstoppable Christian McCaffrey on the season, solidifying the quarterback as the most elite player in fantasy football. Popularized as a human cheat code, Lamar Jackson will score another billion video game points for my fake team in this mock fantasy football season.

3.2 (26th overall): Miles Sanders (RB – PHI)
A quick turnaround meant I had the second pick in Round 3, and I spent it almost immediately on Miles Sanders. Doubters and haters will say that Miles Sanders plays in too crowded of a backfield in Philadelphia, that he doesn’t get enough carries, or that he is too dependent on receptions. While that was largely true in the first half of 2019, the back end of the season was a different story altogether:

Why wouldn’t Doug Pederson want to build on Sanders’ success? Sure, Boston Scott is a fan favorite in Philly, but there’s a good reason the Eagles selected Miles Sanders as the second overall RB in the 2019 NFL Draft.

What’s that, you say? What about Jordan Howard? He’s likely gone to free agency in 2020.

Needless to say, I am all-in on a big year from Miles Sanders this year. (Psst, I will be targeting Boston Scott in the later rounds of this draft.)

4.11 (47th overall): JuJu Smith-Schuster (WR – PIT)
I entered Round 4 with a need at wide receiver, but wait for a second — what was this? Current Cardinals running back David Johnson was way down the list of remaining running backs. I mean, I get it, the dude’s been a dud for the past two seasons, but with a fresh start on a new team, who’s to say he can’t re-establish himself as a dominant force in the league? And if he can, wouldn’t that make him the steal of a lifetime? Hmm… imagine Saquon paired with a fresh David Johnson and Miles Sanders in the flex…

I wanted to, but I couldn’t do it. Round 4 is just too early to gamble, and besides, I knew Johnson wouldn’t be going anywhere anytime soon.

Instead, I made a somewhat “safe” decision, filling my need at wide receiver with JuJu Smith-Schuster. I know a lot of last year’s JuJu owners will scoff at this selection, but I like the young wide receiver to bounce back in 2020. As FantasyPros’ own Mike Tagliere told us in an early mock draft with Bobby Sylvester and Adam Rank, injuries and poor quarterback play were largely to blame for an unsavory season for JuJu in 2019. 2020, though, is a whole other story.

5.2 (50th overall): Calvin Ridley (WR – ATL)
In Round 5, I doubled down on wideouts and drafted Calvin Ridley, though I passed up the likes of Robert Woods, D.J. Chark, T.Y. Hilton, and Adam Thielen to do so. There is a popular theory among fantasy footballers that says third-year receivers are prone to breakout seasons. While this was true for Chris Godwin, Kenny Golladay, and Cooper Kupp last year, it didn’t happen for guys like the aforementioned JuJu Smith-Schuster or Mike Williams. In any event, Calvin Ridley is a tremendously talented receiver in a typically pass-happy offense, so I feel pretty good about his chances catching footballs, racking up yards, and scoring TDs in 2020.

6.11 (71st overall): Phillip Lindsay (RB – DEN)
In Round 6, a lot of high-quality players fell off the board, which is why I was so surprised to see Phillip Lindsay still hanging around. Compared to other available running backs: Devonta Freeman, Derrius Guice, and Damien Williams, Lindsay simply presents the most consistency. I drafted him to fill my flex spot, which is probably right where you want him on your fantasy football team.

7.2 (74th overall): Michael Gallup (WR – DAL)
I had entered another NFC East showdown in Round 7 when I drafted Michael Gallup over Sterling Shepard. My reasoning here was rooted in three key factors: youth, strength, and health. As much as I like Shepard when he’s healthy, his injury history, especially with regard to concussions, is too troubling to ignore. That fact, coupled with Amari Cooper entering free agency, makes Gallup my preferred option and seemingly solid WR3.

At the halfway point of this mock draft, my team looked like this:

I don’t love it, but I don’t hate it. If Lamar Jackson can repeat his lights-out gameplay, this team could go the distance.

8.11 (95th overall): David Johnson (RB – ARI)
In Round 8, it was time to build some depth, but where? I refreshed the rankings in the Draft Wizard and wouldn’t you know it? David Johnson popped up to the top of the list. I was thrilled to take him this late in the draft, but something tells me he’ll be making his way back up draft boards before Draft Day.

9.2 (98th overall): Matt Ryan (QB – ATL)
Uh, Aaron Rodgers was just sitting there in Round 9, but I was in the mood for a stack attack, so I drafted Matt Ryan. Before “stacking” quarterbacks with their wide receivers became a popular DFS strategy, it was a go-to maneuver among the deadbeats and dirtbags in my 22-year-old redraft league at home. A “connection,” we’d call it, which is what I had just created with Matt Ryan and Calvin Ridley here.  Anyway, I could do worse than Ryan as a QB2, so I left Round 9 feeling pretty good.

10.11 and 11.2 (119th and 122nd overall): Cole Beasley (WR – BUF) and Boston Scott (RB – PHI)
In Round 10, I was still without a tight end, but I figured, “screw it,” I’ll just draft Dawson Knox in Round 12. Speaking of Bills, why not draft Cole Beasley right now? It stands to reason that the Bills could draft a wide receiver with the 22nd pick in the upcoming NFL Draft (Tee Higgins, anyone?), and that would mean more opportunities for Beasley to attack the middle of the field and flats from the slot. Granted, Beasley would probably have still been there in the next round, but so was Boston Scott, who I was pleased to handcuff to Miles Sanders in Round 11 (122nd).

12.11 (143rd overall): T.J. Hockenson (TE – DET)
I know I said I’d roll with Dawson Knox in Round 12, but my dude T.J. Hockenson was still available, and I just couldn’t pass him up. It’s not the sexiest pick in the world, and if this were a real draft, I’d be ready to keep an eye on the waiver wire throughout the season. But hey, Hockenson has Tony Gonzalez’s endorsement, and that’s good enough for me. For now.

13.2 (146th overall): Buffalo Bills D/ST
Where-to in Round 13 — kicker or D/ST? I thought about taking the best kicker in fantasy here, which in this case was Harrison Butker. But it’s getting late, I’m feeling groggy, and a very very good Buffalo Bills D/ST is staring me down. Hard. It’s a homer pick, I know, but it’s not a bad one. Despite a humdinger of a doozy of a schedule in 2020, I love what the Bills D/ST is capable of moving forward.

14.11 (167th overall): Zane Gonzalez (K – ARI)
Finally, in Round 14 (146th), I passed on Arizona’s Zane Gonzalez for Houston’s Ka’imi Fairbairn. In a dead heat between two indoor kickers, give me the K with a better offense, and there you have it.

And there you have it! How did the FantasyPros robots grade my draft?

To view the final draft board and other mock draft results, click here or view below. 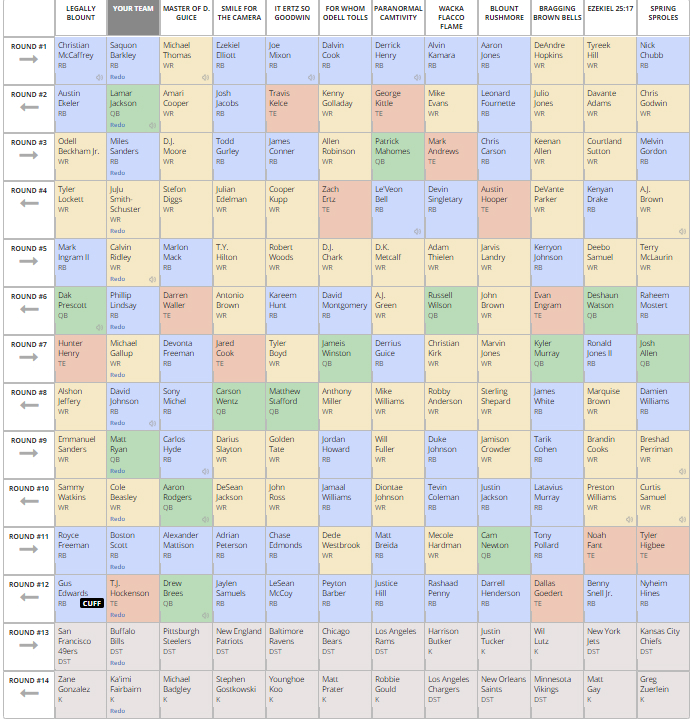 Jim Colombo is a correspondent at FantasyPros. For more from Jim, check out his archive and follow him @WideRightNBlue.