Quintez Cephus is one of the most underrated wide receivers from the 2020 NFL Draft class.

The debate over who is the 1.01 in single QB, dynasty league rookie drafts starts and ends with two players: Clyde Edwards-Helaire and Jonathan Taylor. Having your choice of two potentially elite rookie running backs is a wonderful dilemma sure to be fraught with second guessing. However, if you have the .01 in each round this likely means that you have a lot of work to do in terms of roster building. This means your picks in subsequent rounds are still of great importance, and need to be made with care.

While ADP is a good guide, our expert consensus rankings provide a more accurate picture of what your draft room rivals may think of particular players (thanks in no small part to many drafters having our ECR open in a window during their drafts). As such, being able to complete full rookie mock drafts in mere minutes against the ECR with our Draft Simulator tool is a valuable resource that is worth the price of a subscription on its own. Practice makes perfect, and due to the speed of our Draft Simulator tool, you will be able to test out multiple different strategies in the time it would take you to complete just one live mock draft. For this 16-team, single QB rookie mock draft from the .01 spot we will go four rounds. Lets dig in.

While he did not time with the track speed usually coveted by the dynasty community, he tested just as well as other running backs with multiple Pro Bowls under their belt. A look at his tape shows that he did not rely on speed to win in college, but instead relied on great vision and elite contact balance. He has among the best hands in the class, and has proven that he can succeed in a pro style offense.

He should be a lead back as a rookie, but may take on more of a workhorse role as a sophomore. While comparing him to Kareem Hunt is a massive stretch at best, Edwards-Helaire will be the first running back Andy Reid has had with a skill set that will conjure memories of what Brian Westbrook was able to do in his offense. While Andy Reid never actually stated that he thinks Clyde Edwards-Helaire is even better than Brian Westbrook as general manager Brett Veach erroneously asserted, he did intimate that he felt that CEH had a lot of Westbrook in him. For those of you who may be too young to remember, Brian Westrbook was in the annual top five running back conversation as a member of the Philadelphia Eagles. That is the ceiling you are signing up for when you select Clyde Edwards-Helaire.

2.01 – Laviska Shenault Jr. (WR – JAX)
Laviska Shenault Jr. was widely viewed as one of the top five draft eligible receivers heading into the 2019 college season. The other four names were Jerry Jeudy, CeeDee Lamb, Rashod Bateman, and Tylan Wallace. While it feels almost criminal that Kyle Shanahan passed up on the unique weapon that is Laviska Shenault at 23rd overall, it is apparent that Jimmy Garoppolo needed a wide receiver with the type of catch radius Brandon Aiyuk possesses to unlock his potential. With Deebo Samuel, Jalen Hurd, and George Kittle on the field teams are not going to be able to double Aiyuk, leaving him room to operate when he runs go routes.

But enough about him, let’s get back to Shenault. A wide receiver by trade, Shenault is expected to see snaps at running back, wildcat quarterback, and tight end. He took snaps at all of those positions in college, and has the skill set to continue to succeed while doing so in the pros. Thanks to the extra value he will accrue from his usage in the run game, including around the goal line (he is one pound lighter than Leonard Fournette), Shenault should be a WR2 mainstay for years to come. He should start his career as more of a WR3/flex option due to not having a true franchise quarterback, but if Jacksonville decides to upgrade on Gardner Minshew in the future, we may see Laviska Shenault’s true upside unlocked. With Michael Pittman, Justin Jefferson, Tee Higgins, and Henry Ruggs all already off the board, there was no question that Shenault was my preferred target at 2.01.

3.01 – Van Jefferson (WR – LAR)
Van Jefferson is a talented wide receiver who seems to have a clear path to the number three receiver role in Los Angeles. Furthermore, while it may seem far-fetched, if Cooper Kupp is not extended, Jefferson could step into the high-volume, high-value slot role in Sean McVay’s offense. While he has more upside in the slot, he will likely see most of his snaps on the outside as a rookie. He has proven his ability to win both inside and out, and has done so in the powerhouse conference of the SEC. In fact, arguably his best film came against one of the best cornerback duos in the nation in Derek Stingley Jr. and Kristian Fulton of LSU.

Jefferson’s number one trait is his Pro-Bowl level route-running skills, but he also has strong hands and an ability to win contested catches. Jefferson had the majority of his success on slants, curls, and comebacks in college, and may be asked to run a similar route tree for the Rams. While he does not profile as a burner, he has higher top end speed than many people realize and was clocked at 21.1 mph during Senior Bowl week. He may not command bracket coverage like Brandin Cooks did at times, but opposing defenses will be forced to respect his speed when he is lined up on the outside. It would be a major surprise if Van Jefferson did not become a long term dynasty asset, so landing him at 3.01 in a 16 team league (analogous to 3.09 in a 12 team rookie draft) feels like a steal.

4.01 – Quintez Cephus (WR – DET)
One of the most underrated wide receivers from the 2020 NFL Draft class, his college opponents, including the number one cornerback drafted and new teammate Jeffrey Okudah had major respect for the tough Wisconsin wideout. In fact, prior to the draft Okudah offered that it was Cephus who was the toughest wide receiver to cover. For context, Ohio State had wide receivers like K.J. Hamler, Tee Higgins, Justyn Ross, and Donovan Peoples-Jones on the schedule. The Detroit Lions were able to scoop Cephus up in the fifth round, but there is a legitimate argument to be made that he could have gone a round or two earlier had he not been embroiled in, and later acquitted of sexual assault allegations, and temporarily kicked off the team as a result.

Quintez Cephus is a physical receiver with the type of ball skills to quickly make him one of the apples of Matthew Stafford’s eye. While he has very little blocking him in terms of a path to dynasty relevance, he may be deployed in more of a rotational role as a rookie. Marvin Jones Jr. and Danny Amendola are both free agents after the 2020 season, and Geronimo Allison, who signed a one year deal near the veteran minimum, is no sure thing to make the 2020 roster. This means that Cephus could rise to the number two or three receiver role as early as this season.

49th overall is no place for a wide receiver with Cephus’ sort of dynasty upside, and will likely be looked back on as one of the steals of the 2020 rookie draft season. Cephus projects as more of a WR3/flex in dynasty as one would expect the Lions to add a top talent at the position either through free agency or the 2021 NFL Draft. In the fourth round of a 16 team rookie draft, Cephus should prove to be an incredible value. 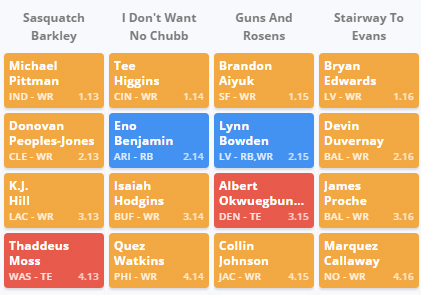 Raju Byfield is a featured writer for FantasyPros. For more from Raju, check out his archive and follow him @FantasyContext.