Who will play? Who’s in and who’s out? What night are those teams playing, again? These are the questions that have permeated the fabric of the NFL and fantasy football this season. In the age of COVID, it’s difficult to predict what we’re going to get from week to week.

In Week 4, the Chiefs and Patriots played on Monday night in an unexpected double-header. Now in Week 5, Tennessee/Buffalo has already been rescheduled for Tuesday, while Denver/New England has been rescheduled to Monday late afternoon. With all of that in mind, remember that keeping up with the latest news, injuries, inactives, and scheduling changes is more important than ever when setting your lineups.

After an exciting TNF game that saw Tom Brady and Nick Foles duel it out once again, we’re ready to dive into our Week 5 grades!

There are plenty of familiar names among the top-graded running backs this week, though there are a couple of risers here due to some excellent matchups. Squaring off with the lowly Las Vegas run defense, Clyde Edwards-Helaire is our highest-graded back of the week. Todd Gurley sees a significant boost against Carolina, and Kenyan Drake – yes, Kenyan Drake – is still a strong start this week, as he faces the Jets.

Start of the Week: Raheem Mostert

Stream of the Week: D’Ernest Johnson

Fade of the Week: Myles Gaskin

Tough Calls: Josh Jacobs and Alvin Kamara are graded just fractions of a point apart this week. Despite Kamara’s historic start to the season, Jacobs gets the edge here. Kamara will lose some passing work with Michael Thomas likely returning, and his matchup is much tougher than Jacobs’. 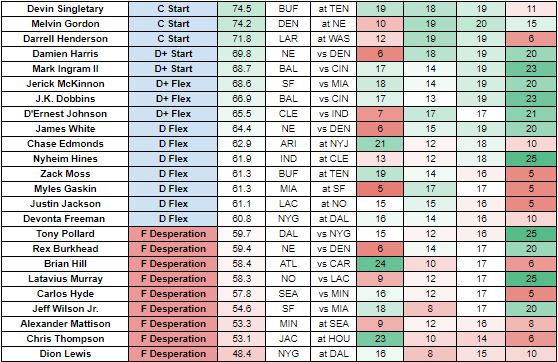 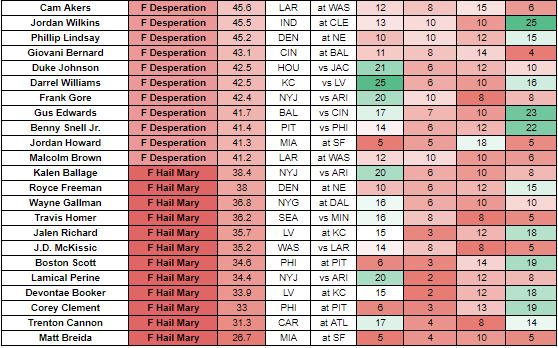 No surprises here, as target hog DeAndre Hopkins earns the top spot in the Week 5 grades. Michael Thomas likely makes his return and is immediately a must-play option. Two Seahawks and two Falcons make regular appearances in the top-10, and despite a rocky early season showing, D.J. Moore is a strong play against Atlanta this week.

Start of the Week: Darius Slayton

Stream of the Week: Tim Patrick

Fade of the Week: Terry McLaurin

Tough Calls: Adam Thielen comes into Week 5 graded just a little better than Keenan Allen, and it all comes down to matchup. Allen has been a target machine as of late, though Thielen’s golden opportunity against the Seahawks gives him the edge over Allen here. 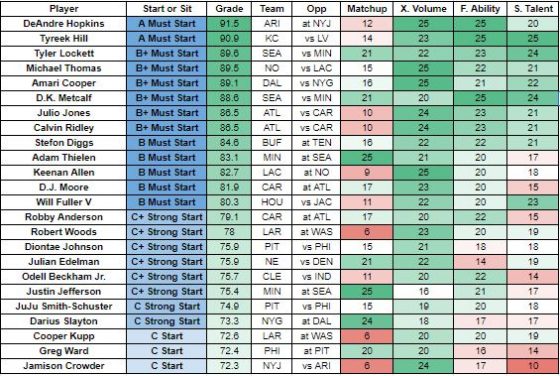 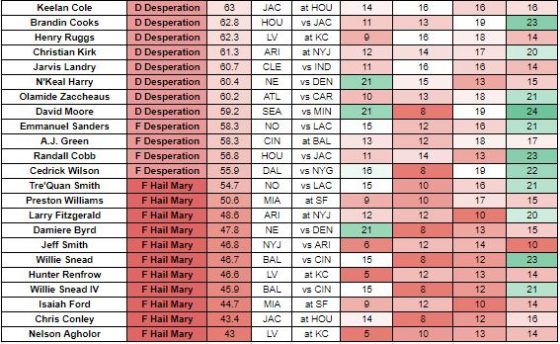 Russell Wilson once again finds himself atop our weekly grades, as he’s been playing on another level this season. Patrick Mahomes, Lamar Jackson, and Josh Allen are easy must-starts nearly every week, while Deshaun Watson finds himself a top option in Week 5 even though his season has not gotten off on the best footing.

Fade of the Week: Baker Mayfield

* If Drew Lock is out, Brett Rypien is an ‘F Hail Mary’
* If Jimmy Garoppolo is out, Nick Mullens is a ‘C Start’ 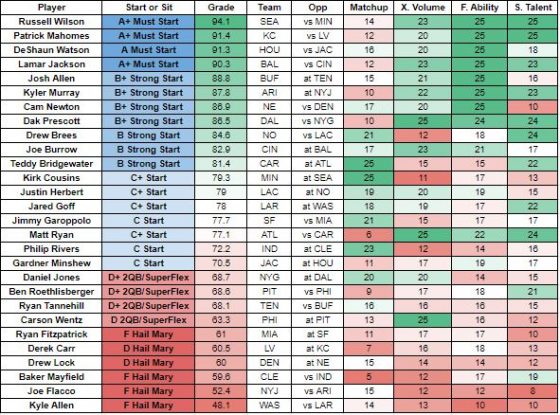 After a monstrous 15-catch effort in Week 4, Kittle makes his triumphant return as the top-graded tight end of the week. The other names at the top of the list are all too familiar, while we’ve got a streamable option in Ian Thomas, who could find success in a very favorable matchup, despite his early-season struggles.

Start of the Week: Eric Ebron

Stream of the Week: Ian Thomas

Fade of the Week: Austin Hooper

Tough Calls: Despite the better matchup, Hunter Henry comes in graded just below Evan Engram here. Engram should be in line for more volume than Henry, and his tilt with Dallas is nothing to shy away from, either.

*If Jared Cook is out, Adam Trautman remains an ‘F Hail Mary’ 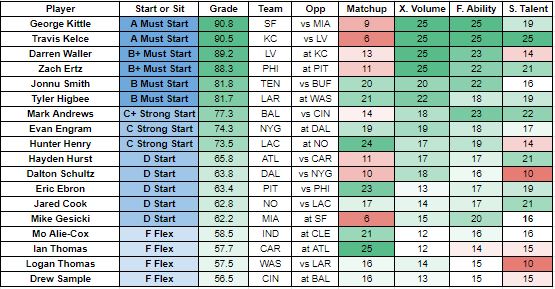 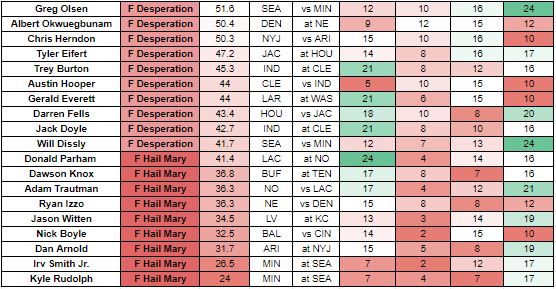 Whether it’s Drew Lock or Brett Rypien under center, New England still grades out as the top DST of the week. Pittsburgh remains an elite option, while Arizona is elevated significantly due to the delicious matchup with the lowly Jets.

Start of the Week: Arizona Cardinals

Stream of the Week: Dallas Cowboys

* If Cam Newton is out, Denver becomes a ‘D Start’ 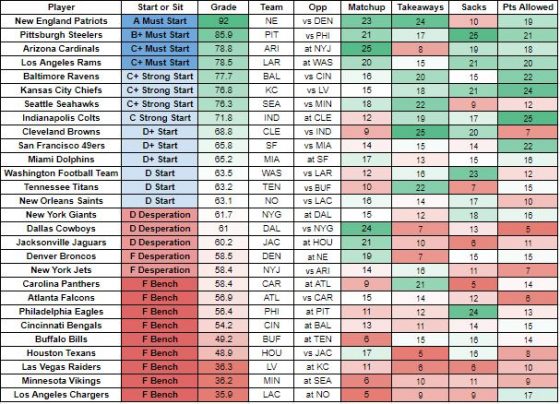