Another week, another crazy storyline in the NFL. Last night’s Jets/Broncos game proved to be a much better showing than we expected, as Sam Darnold and Brett Rypien made some entertaining plays, Melvin Gordon ran wild, and there was even a Joe Flacco sighting. Tennessee and Pittsburgh has been postponed due to an outbreak of COVID among the Titans’ ranks, and the game will not be played in Week 4. After a devastating Week 2 full of injuries, Week 3 was thankfully more healthy, though there are still some notable names out of action in Week 4. Chris Carson‘s status is up in the air, Michael Thomas is out again and Davante Adams both have a a chance to return to the field.

The top-graded backs for Week 4 shouldn’t be a shock, as studs Alvin Kamara, Ezekiel Elliott, and Aaron Jones make up the top three. Rookie breakout James Robinson makes it inside the top-10 ahead of guys like Miles Sanders and James Conner as the former continues his ascent.

Start of the Week: Mike Davis

Stream of the Week: Rex Burkhead

Fade of the Week: Adrian Peterson

Tough Calls: Kenyan Drake hasn’t broken out yet, but a big game could be in the works against Carolina’s exploitable run defense. Meanwhile, Josh Jacobs has been huge for Las Vegas thus far but draws a more difficult matchup in Buffalo. Drake has been given a healthy workload thus far, and this is the week his volume should pay dividends, giving him a slight edge over Jacobs.

* If Chris Carson is out, Carlos Hyde becomes a ‘D+ Start’
* If Kareem Hunt is out, Nick Chubb becomes an ‘A Must Start’
* With Cam Akers ruled out, both Darrell Henderson and Malcolm Brown get slight boosts, but neither moves up or down in grade
* With Leonard Fournette ruled out, Ronald Jones remains a ‘D+ Start’ 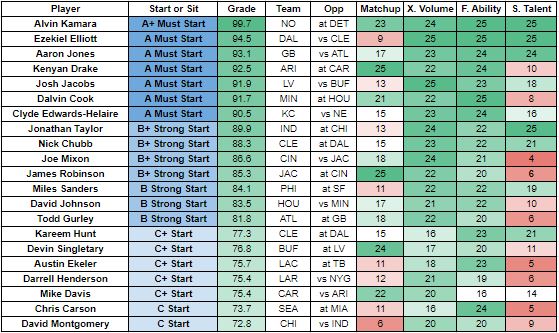 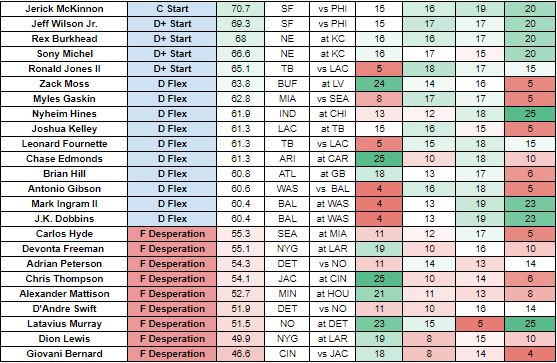 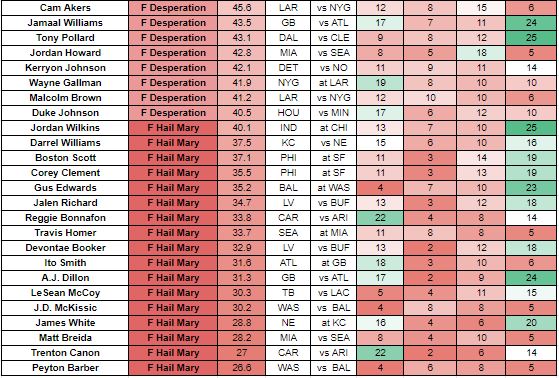 Davante Adams looks set to return for MNF, so he’s the highest-graded wideout of the week. Julio Jones should also be available, and he and Calvin Ridley round out the top-5 here.

Start of the Week: Brandin Cooks

Stream of the Week: Preston Williams

Fade of the Week: Keelan Cole

Tough Calls: Tyler Lockett grades out just a tenth of a point better than Julio Jones and Calvin Ridley, as Seattle’s offense has been unstoppable this season, and the ‘Hawks get a great draw with Miami.

* If Davante Adams is out, Marquez Valdes-Scantling becomes a ‘C+ Strong Start’
* With Michael Thomas out, Emmanuel Sanders and Tre’Quan Smith both become a ‘D Flex’
* If Will Fuller is out, Brandin Cooks moves up in grading but remains a ‘C+ Strong Start’
* All of Julio Jones, Calvin Ridley, and Russell Gage are dealing with injuries, and their statuses should be monitored closely
* Christian Kirk is not graded, but if he plays, he becomes an ‘F Desperation’
* These grades assume DeSean Jackson and Alshon Jeffery are out 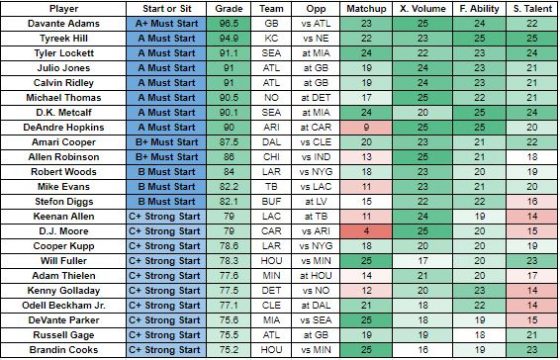 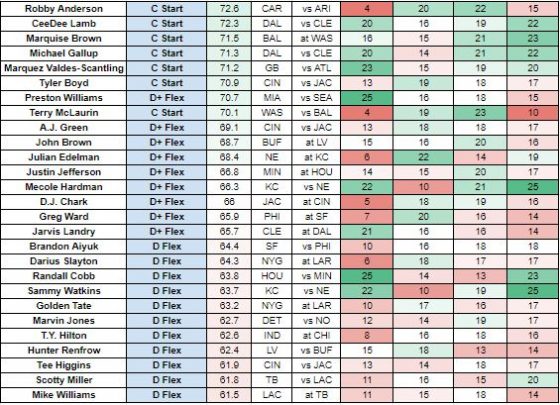 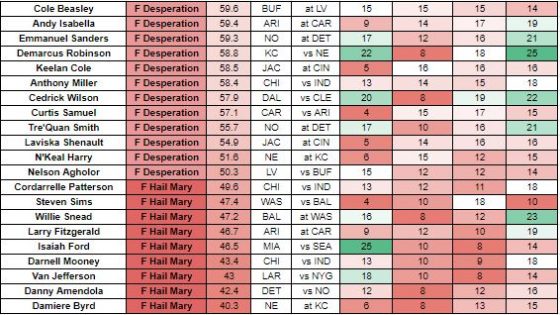 No surprises here, as this week’s top-graded QB is the MVP favorite in Russell Wilson. The last two years’ MVPs come in just behind him, while Dak Prescott and Aaron Rodgers round out the top-5 thanks to big seasons and quality matchups.

Start of the Week: Joe Burrow

Stream of the Week: Ryan Fitzpatrick

Fade of the Week: Derek Carr 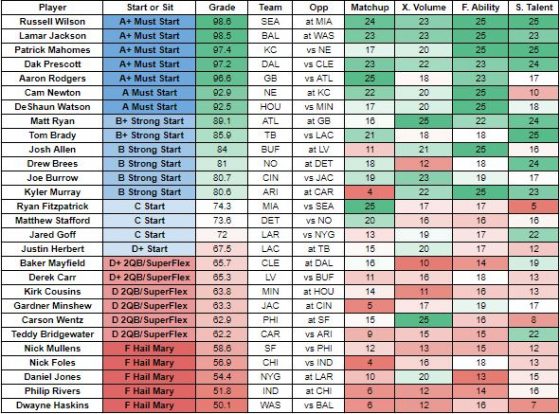 With George Kittle set to return this week, the top-5 are the usual suspects, with all of Kittle, Zach Ertz, Travis Kelce, Darren Waller, and Mark Andrews making up the group. There are some interesting plays among lower-rostered tight ends, including a potential smash spot for Robert Tonyan against Atlanta.

Start of the Week: T.J. Hockenson

Fade of the Week: Jimmy Graham

Tough Calls: It’s tough to bet against Travis Kelce, but New England has been solid against tight ends this season, and Darren Waller gets the edge here. He’ll likely see enormous volume with Bryan Edwards out and Henry Ruggs a longshot, so he ends up as the top-graded tight end, just ahead of Kelce.

*With Jared Cook out, Adam Trautman moves onto the list as an ‘F Desperation’ play 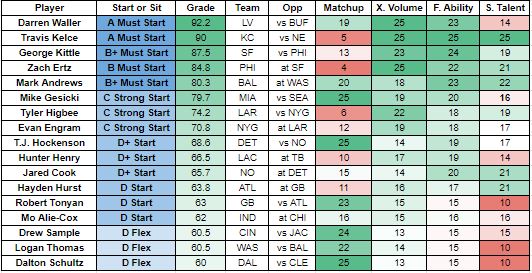 The 49ers face a struggling Philly team and earn the top grade of the week here. The rest of the top-5 should all be familiar in the Rams, Ravens, Buccaneers, and Colts.

Stream of the Week: Arizona Cardinals 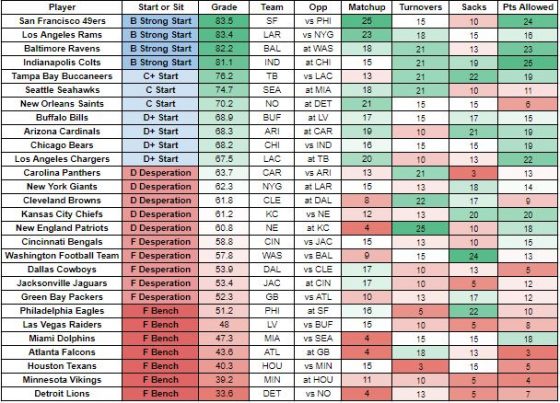