Wow! What an opening week! We saw plenty of quality performances from some of fantasy’s best in Josh Jacobs and Davante Adams, some duds in Mark Ingram and Mike Evans, and plenty of notable injuries. For Week 2, we’ve already been treated to a Thursday Night fireworks show that saw rookie Joe Burrow shine bright in primetime and Baker Mayfield and Nick Chubb help the Browns avoid an 0-2 start with a 35-30 shootout victory. This week, we’ll be without Michael Thomas and Le’Veon Bell at least. Those players are already confirmed out, but we’ve got some other notable players dealing with significant injuries in Kenny Golladay, George Kittle, Chris Godwin, and James Conner.

Week 1 gave us some insight into how opposing defenses might perform, how team offenses may look, and potential target shares and workloads moving forward. It’s a small sample size, but the first 16 games of the year should guide us in better projecting results for Week 2. We’ve seen some improved grades in the mid-to-lower tiers, though most of our top-notch studs remain at the head of the class.

Once the season begins, the most difficult part of any fantasy manager’s week is start or sit decisions. These lineup choices can make or break a week, but unfortunately, not everyone has time to sit down and read lengthy fantasy advice articles. That’s where Quick Grades comes in. Each week of the football season, I’ll be providing a condensed and easily digestible chart of grades for 220 fantasy-relevant players based on the following four criteria:

Ahead of Week 2, we’ve got two running backs with perfect grades in Ezekiel Elliott and Alvin Kamara. Zeke gets a tasty matchup in the Falcons, while Kamara should see his already-robust target share increase with Michael Thomas sidelined. Clyde Edwards-Helaire remains a strong play but gets a tougher matchup in the Chargers, and Jonathan Taylor‘s grade skyrockets after Marlon Mack‘s season-ending Achilles tear suffered in Week 1.

Tough Calls: This week, Todd Gurley and rookie Jonathan Taylor come in pretty closely in their respective grades, though the edge goes to the rookie here. Taylor’s great matchup, ability to work as a runner and receiver out of the backfield, elite offensive line, and newfound workload make him a strong start in Week 2.

* If James Conner is ruled out, Benny Snell becomes a ‘C+ Strong Start’ 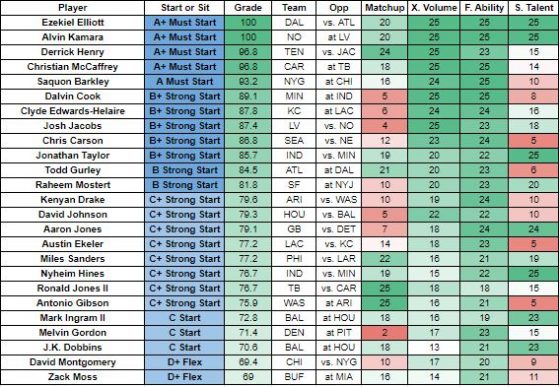 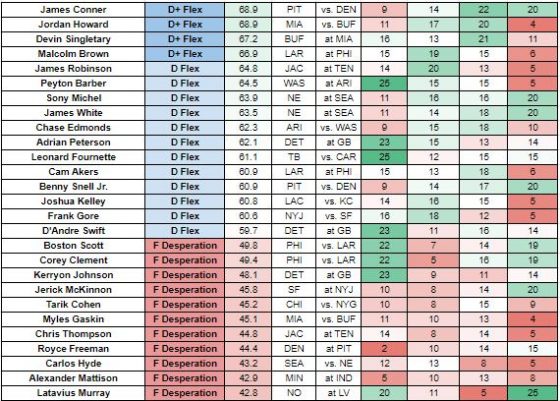 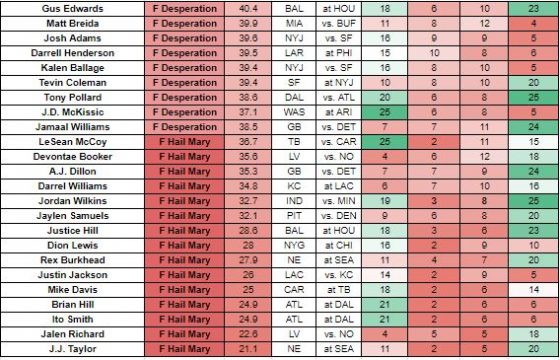 Michael Thomas has been ruled out, and both Chris Godwin and Kenny Golladay are also out, so those who rostered any of the studs will have to look for other options. Emmanuel Sanders, Scotty Miller, and Quintez Cephus all get substantial boosts this week as a result of those absences. We’ve got a pair of target monsters as our top-graded wideouts, while some familiar faces make up the rest of the highest tier.

Tough Calls: Robert Woods and Amari Cooper are neck-and-neck this week, and while Woods should command a larger share of his team’s targets this week, Cooper’s tasty matchup with Atlanta gives him the advantage in Week 2. 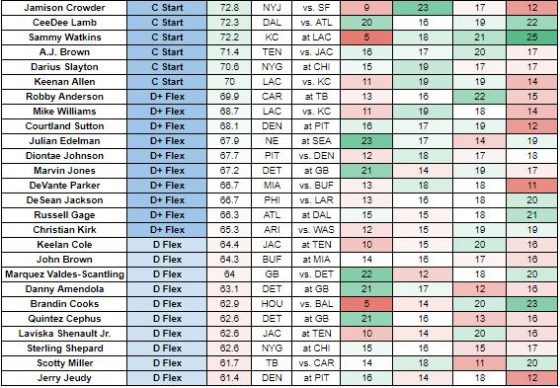 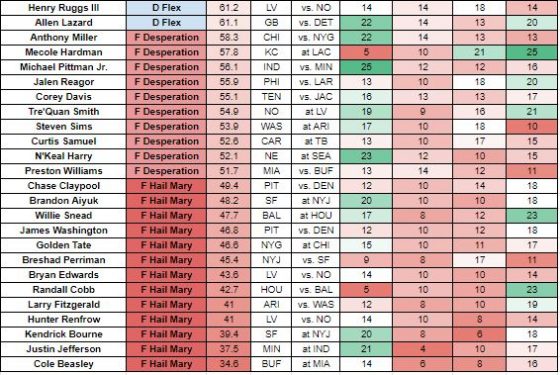 While Lamar Jackson may be lauded as the top play at QB this week, he’s not our highest-graded signal-caller here. Instead, we’ve got Dak Prescott and his full arsenal of weapons in a huge smash spot against a porous Falcons’ secondary. A pair of young, mobile QBs come in next. Kyler Murray dazzled against San Francisco in Week 1, and he should be able to work some of that magic against Washington, while Josh Allen could have a big day against Miami. After a rough Bucs’ debut, Tom Brady is due for a bounceback, and Aaron Rodgers draws a favorable matchup with Detroit that lands him in the top-10.

Deep-League Stream of the Week: Dwayne Haskins (WAS) 5% Rostered

Tough Calls: Unsurprisingly, Lamar Jackson and Patrick Mahomes both grade as ‘A’ plays in Week 2, though L-Jax gets a slight advantage. His matchup with Houston is a bit easier than Mahomes’ matchup with the Chargers. 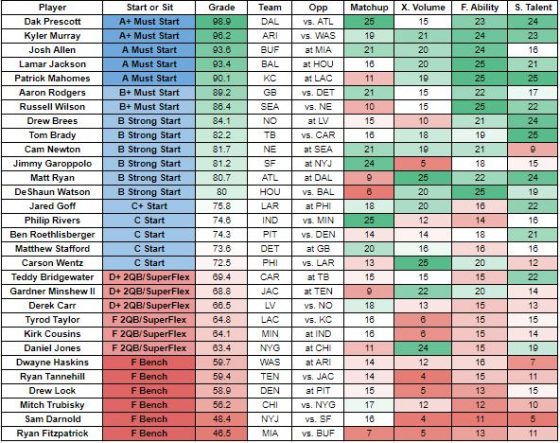 The top-heavy TE position sees the usual cast of characters making up the top-5, as Travis Kelce grades as the best option at his position in Week 2. George Kittle is a must-start if he suits up, but there’s a chance he’s held out for precautionary reasons in a matchup the 49ers could certainly win without him (*Editor’s Note: Kittle has been ruled out)

Stream of the Week: Logan Thomas (WAS)

Tough Calls: I love Jared Cook this week, but he grades out just below the next highest TE, Darren Waller. With Michael Thomas out, Cook should absorb some additional targets and yards after leading his team in receiving in Week 1. However, Waller is the top target for a team that should be chasing points and avoiding throwing at Janoris Jenkins and Marshon Lattimore, leaving Waller to do some damage over the middle of the field. The latter is a better option here. 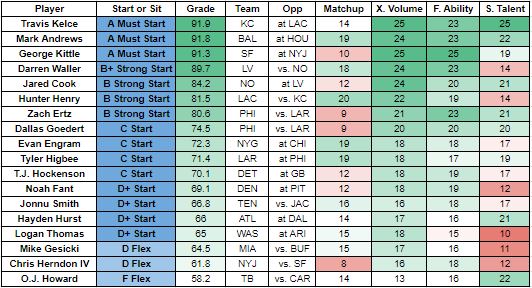 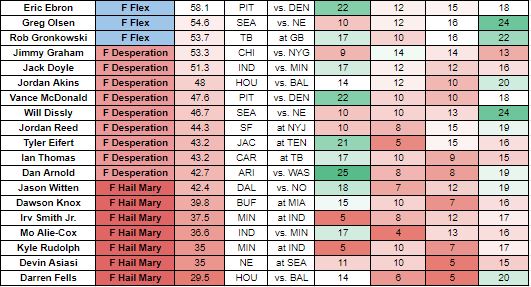