After an unbelievably unfortunate weekend of injuries, we’ve made it back for Week 3. Last week, the fantasy world watched on in collective horror as Christian McCaffrey, Saquon Barkley, and Raheem Mostert suffered serious injuries that will have a major impact on the rest of the season. The rest of the season, however, begins now. This week, we see significant changes throughout the positional grades and plenty of “what-if’s,” “could-be’s,” and “maybes” with plenty of guys knicked up heading into the week. It’s an unusual week for fantasy football, but hey, that fits in just fine with the rest of this stinkin’ year. We saw a less-than-epic battle of the facial-haired quarterbacks on Thursday Night Football, so Dolphins and Jags players are excluded from this one, but as always, we’ve got the rest of the fantasy-relevant players graded (and then some!).

This week, I’m adding D/ST grades, and just like the skill-position players, there will be four criteria used for grading on a scale from 1-25, and final grades will be from 1-100. The four criteria for a D/ST grade are: Matchup, Turnovers, Sacks, and Points Allowed.

Alvin Kamara retains his spot atop our grades for this week, as his floor and ceiling are both ridiculously high right now. Familiar faces round out the top of the class, with Miles Sanders slotted back in thanks to his strong performance in a Week 2 return. A pair of 49ers backs get a big bump, Mike Davis rises significantly, and… is that Devonta Freeman?

Tough Calls: After a monster Week 2, Aaron Jones faces a much tougher task in Week 3 in the form of the Saints’ stout rush defense. Conversely, Kenyan Drake gets a solid draw against Detroit and grades out just slightly better than Jones here.

* With Zack Moss out, Devin Singletary becomes a ‘C+ Start’
* If Josh Jacobs is out, Jalen Richard becomes a ‘D Flex’ It’s more of the same for our highest-graded wideouts this week, though there are a couple of notable injuries in Davante Adams and Julio Jones, who have both missed practice time this week. D.K. Metcalf continues to see his stock rise, and are all three of the Cowboys’ wideouts set to feast in a sumptuous matchup with Seattle?

Fade of the Week: Emmanuel Sanders

Tough Calls: Amari Cooper comes in just a half point ahead of Atlanta’s dynamic duo of Julio Jones and Calvin Ridley, and it’s due to his matchup. Seattle has been a sieve for air yards this season, and Cooper should be the primary beneficiary of this juicy matchup. He gets the edge over the Falcons’ talented twosome. 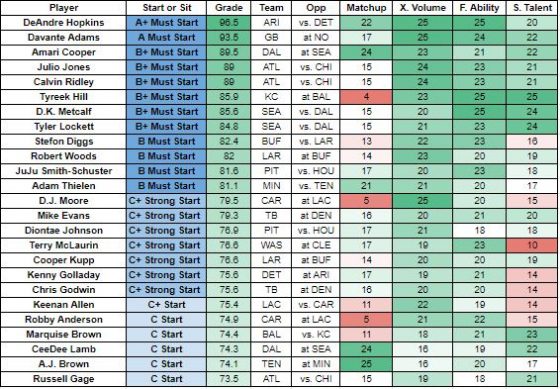 This week, it’s not Lamar Jackson or Patrick Mahomes getting the highest grade. Squaring off against an ultra-porous Seattle secondary, Dak Prescott takes head-of-the-class honors for Week 3, with a TRIO mobile signal-callers just behind him for their respective matchups. Russell Wilson should continue to cook, as he grades out as an ‘A’ once again.

Fade of the Week: Drew Brees (NO)

Tough Calls: Mitch Trubisky is a start this week due to his solid matchup with Atlanta, though Ryan Tannehill comes in just ahead of him with a solid matchup of his own in Minnesota. Coming off a huge Week 2, the Titans signal-caller has the edge. Once again, Travis Kelce comes in with the highest tight end grade of the week, though target monster Darren Waller is just fractions of a point behind him. Tyler Higbee and Jonnu Smith continue their ascents and find themselves among the highest-graded options of Week 3.

Tough Calls: The top-two picks this week come down to Darren Waller and Travis Kelce, though Kelce gets the slight edge here due to his surrounding talent. Waller is the unquestioned top option in Las Vegas’ passing game, and he’ll likely be the focus of Bill Belichick’s defensive gameplan. Two of top-5 at the position might seem a little unfamiliar, but the Buccaneers will face Jeff Driskel, and WFT has played good football so far. The Cardinals’ D/ST has been better than expected in 2020 and get a strong draw against Matthew Stafford and the Lions, and the Giants’ D/ST makes a sneaky play against Nick Mullens and a banged-up 49ers’ offense.

Stream of the Week: Arizona Cardinals