Welcome to Week 1, everybody! We made it. Seven long months have passed since we saw the Kansas City Chiefs come back against the San Francisco 49ers in the fourth quarter of the Super Bowl to claim victory on the biggest stage. But that was last year, and we’re on to a new season full of its own thrills and excitement.

Once the season begins, the most difficult part of any fantasy manager’s week is start or sit decisions. These lineup choices can make or break a week, but unfortunately, not everyone has time to sit down and read lengthy fantasy advice articles. That’s where Quick Grades comes in. Each week of the football season, I’ll be providing a condensed and easily digestible chart of grades for 220 fantasy-relevant players based on the following four criteria:

The players are sorted by grade in descending order with the highest grades at the top and the lowest at the bottom. The highest-graded players receive A+ (Must start), and the lowest receive F. However, there are varying degrees of the F grade, and some players with this grade are flex plays, desperation plays, Hail Mary plays, or should remain on your bench.

Already drafted? Get a free analysis of your team with My Playbook >>

A trio of familiar faces get this week’s highest RB grades, with Josh Jacobs as the numero uno based on what should be a very exploitable matchup with Carolina. Both Saquon Barkley and Derrick Henry have difficult matchups this week, as does Alvin Kamara. Conversely, the Colts tandem of Jonathan Taylor and Marlon Mack have an excellent matchup with Jacksonville this week, and both should excel in this spot.

Start of the Week: Raheem Mostert

Stream of the Week: Chris Thompson

Fade of the Week: James Robinson

Tough Calls:
Aaron Jones and Miles Sanders grade out pretty similarly this week, but we’ll give the edge to Jones here due to some uncertainty surrounding Sanders’ workload and the advantage Jones has in his team’s offensive line.

*Editor’s Note: Miles Sanders was ruled out on Saturday due to a hamstring injury 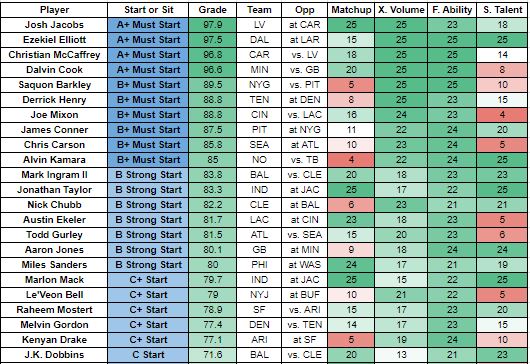 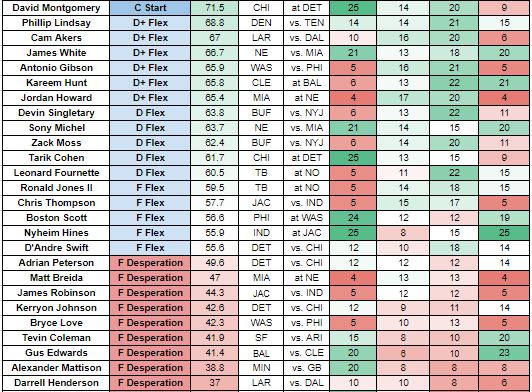 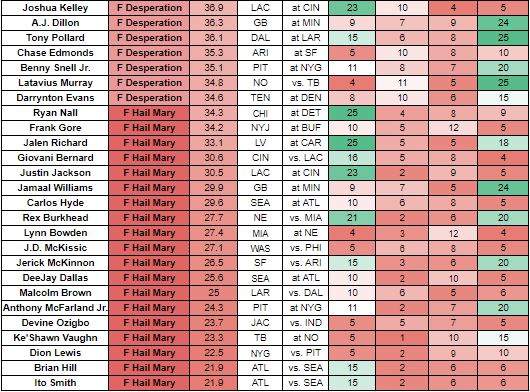 It’s no surprise to see Michael Thomas as the highest graded wideout in the opening week of the season. The NFL single-season receptions leader will get a chance to make some more noise against a beatable Bucs’ secondary, Chris Godwin lines up for the opposing offense in a matchup that should be good for all the receivers.

Start of the Week: D.K. Metcalf

Stream of the Week: Steven Sims

Fade of the Week: Preston Williams

Tough Calls:
Keenan Allen and Adam Thielen are neck-and-neck in grading this week, but Allen gets the advantage due to the volume he should see. Even if Mike Williams suits up, he’ll likely be limited, leaving Allen to soak up the bulk of the team’s targets against a friendly Bengals secondary. 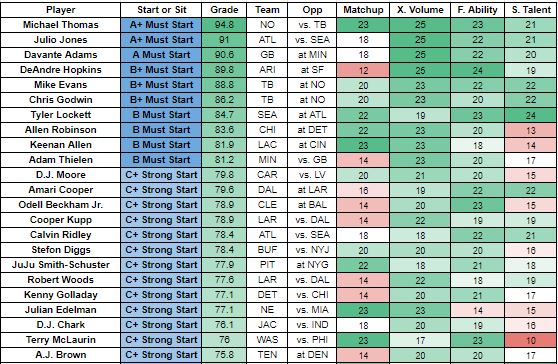 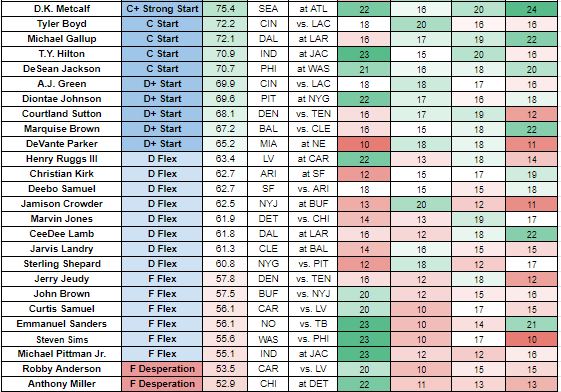 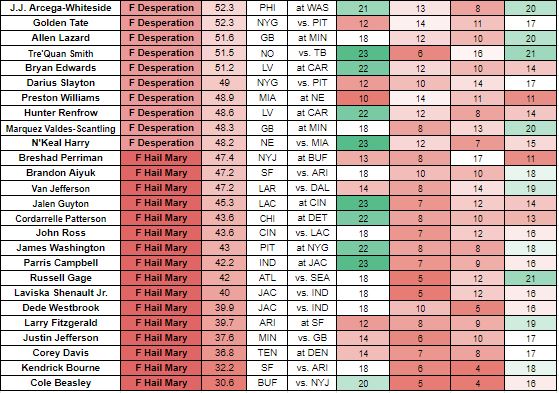 Two of the best in the league faced off on Thursday night, so a couple of notable names in Patrick Mahomes and Deshaun Watson are missing here, but the usual suspects find themselves at the top of the class this week. Notably, Cam Newton surprisingly sneaks into the top five with an excellent matchup teed up at home against Miami.

Start of the Week: Jimmy Garoppolo

Stream of the Week: Teddy Bridgewater

Fade of the Week: Baker Mayfield

Tough Calls:
Two of the NFC South’s signal-callers have nearly identical grades this week, as Tom Brady squares off against the Saints, and Matt Ryan faces off with Seattle in a battle of the birds. While New Orleans has made plenty of offseason moves to upgrade its secondary, the unit can still be exploited, and Brady gets the advantage over Ryan, who faces a tougher task in Seattle’s secondary. 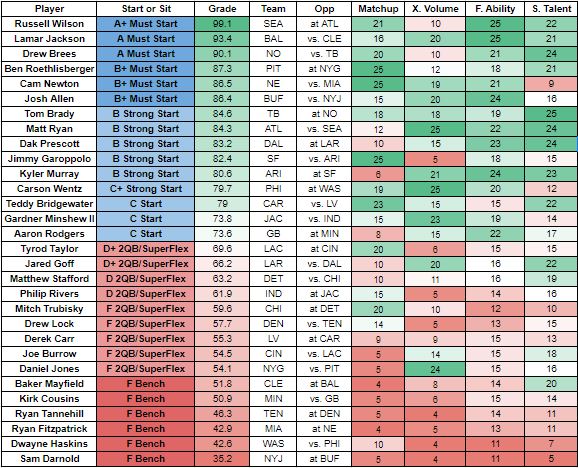 After last night’s season-opener, Travis Kelce has already played, but even if he hadn’t, Kittle would still be the play of the week. His matchup with Arizona is about as cushy as it gets, and he should be head-and-shoulders above the other receiving options in San Fran for targets.

Start of the Week: Dallas Goedert

Stream of the Week: Eric Ebron

Fade of the Week: Austin Hooper

Tough Calls:
Coming in after Kittle are Zach Ertz and Mark Andrews who both have great matchups and plenty of expected volume. I’ll give the edge to Ertz though, as his matchup is a bit better, and the receivers around him are more banged up than those around Andrews, providing additional opportunity for the Eagle. 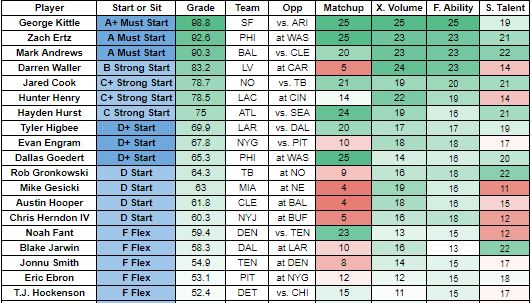 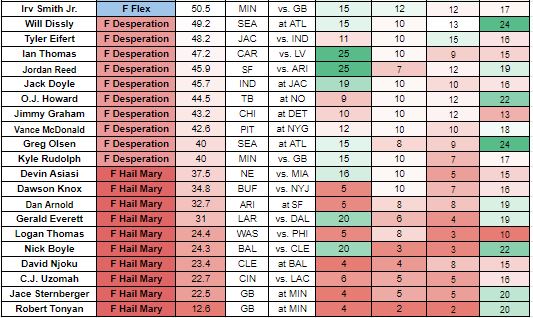